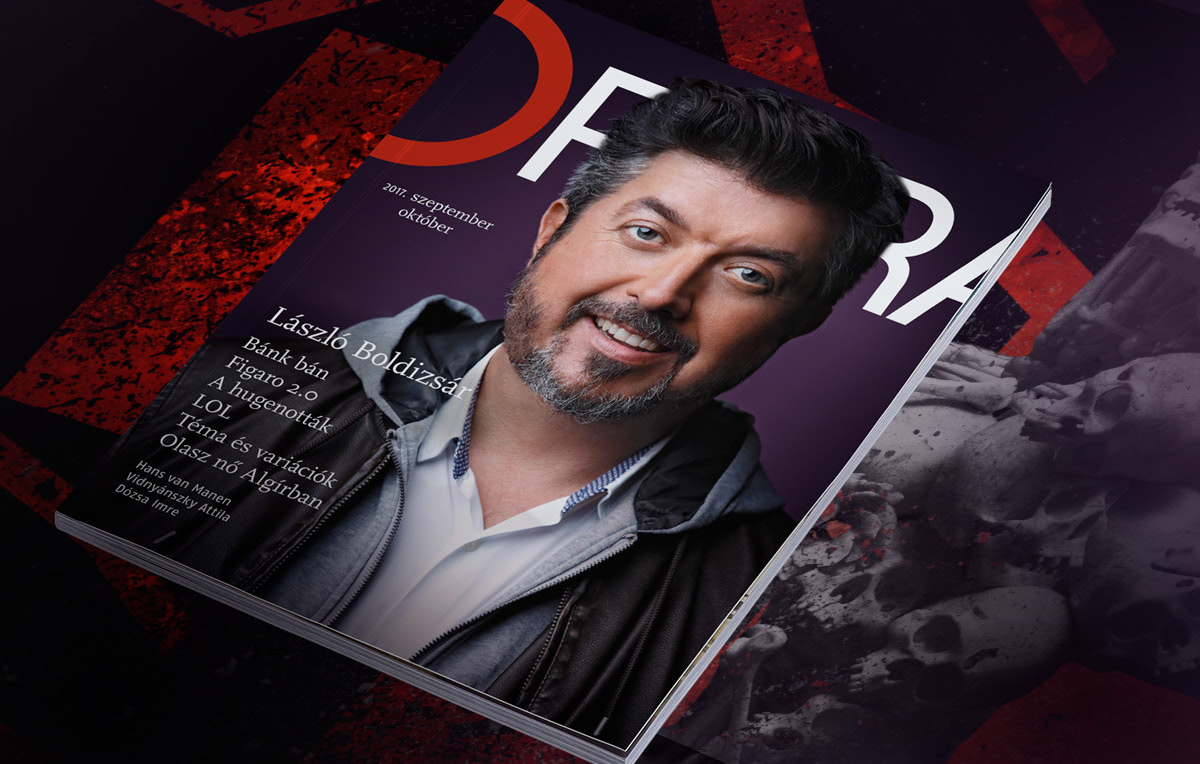 In parallel with the launch of the 2017/18 season, the 26th issue of Opera Magazine was completed, with the main actor of the Hugenotts, László Boldizsár on the cover. More autumn premieres can be found in the magazine: Attila Vidnyánszky, director of Bánk bán and László Boldizsár had been interviewed about the forthcoming productions. The  portrait of the LOL! Ballet performance choreographer, Hans van Manen, and a portrait of the Italian woman in Algérie’s young conductor, Francesco Lanzillotta showcase the work of the two artists. The director salutes in front of Éva Schubert (Kossuth Prize winner actress). In addition to […] 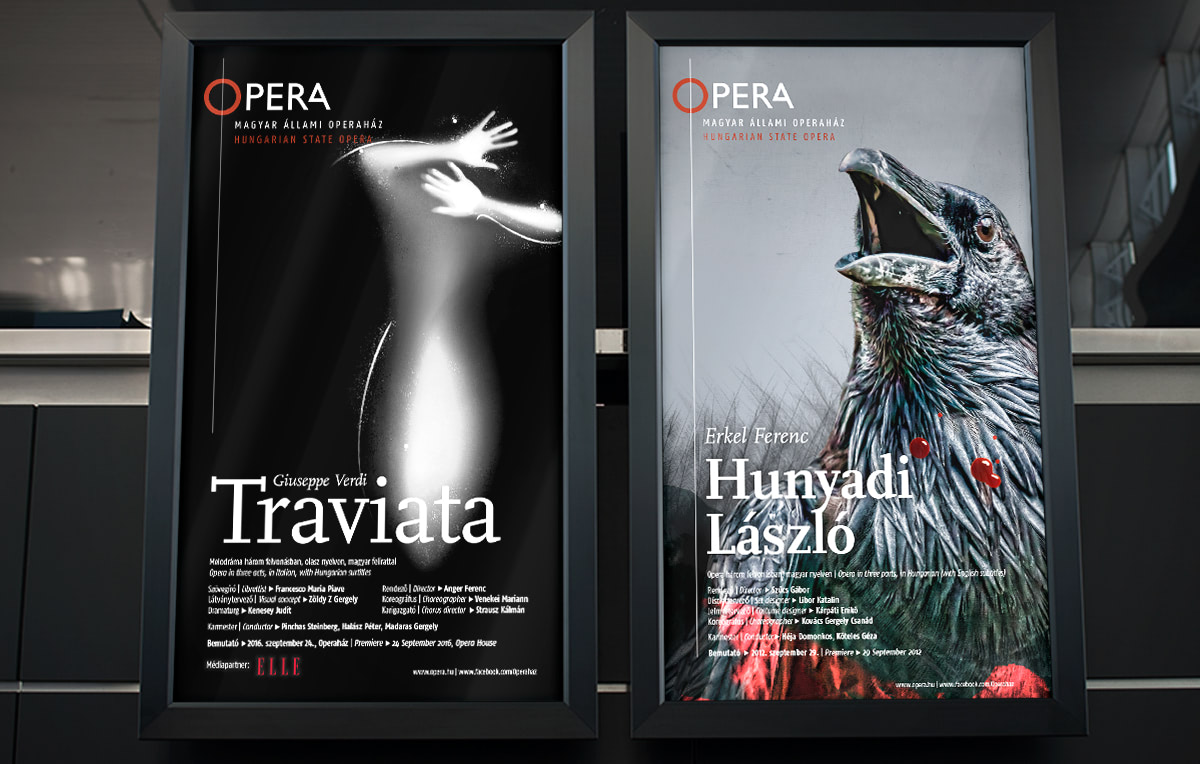 One of the most spectacular part of building the image of the Hungarian Opera House is the creation of the premier creatives. The logo is added to the posters in a predefined structure as well as the text elements. Using these elements help to define and recognize the “opera brand”. Then the visual creatives give an impression, symbolic hints to the plays or show a preview of the stage scenery. They are intended to express the play’s style and message. Lot of variations are made from the approved “base creative”, online and offline as well. There are 22-28 premiers per […] 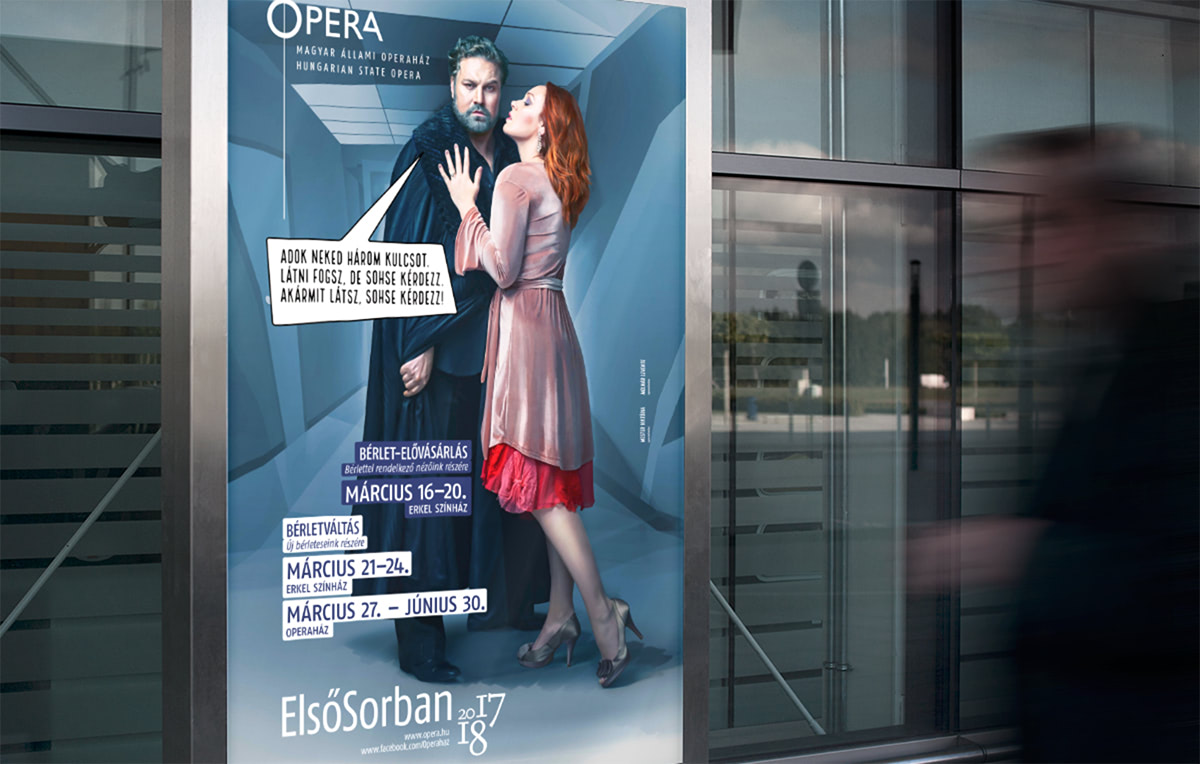 The 2017/18 campaign of the Hungarian State Opera is inspired by the genre of the comic books. The series of 12 creatives announces the new season of the theater. Like in previous years, creatives are focusing on the renowned artists of the institution as well as their new performances and prominent pieces of its repertoire. On the twelve pictures there are six classics shown; one fairytale opera, four ballet productions and on one creative the “tour message” appears in the “interpretation” of the orchestra and members of the choir. The aim of the campaign was to create a comprehensible and […] 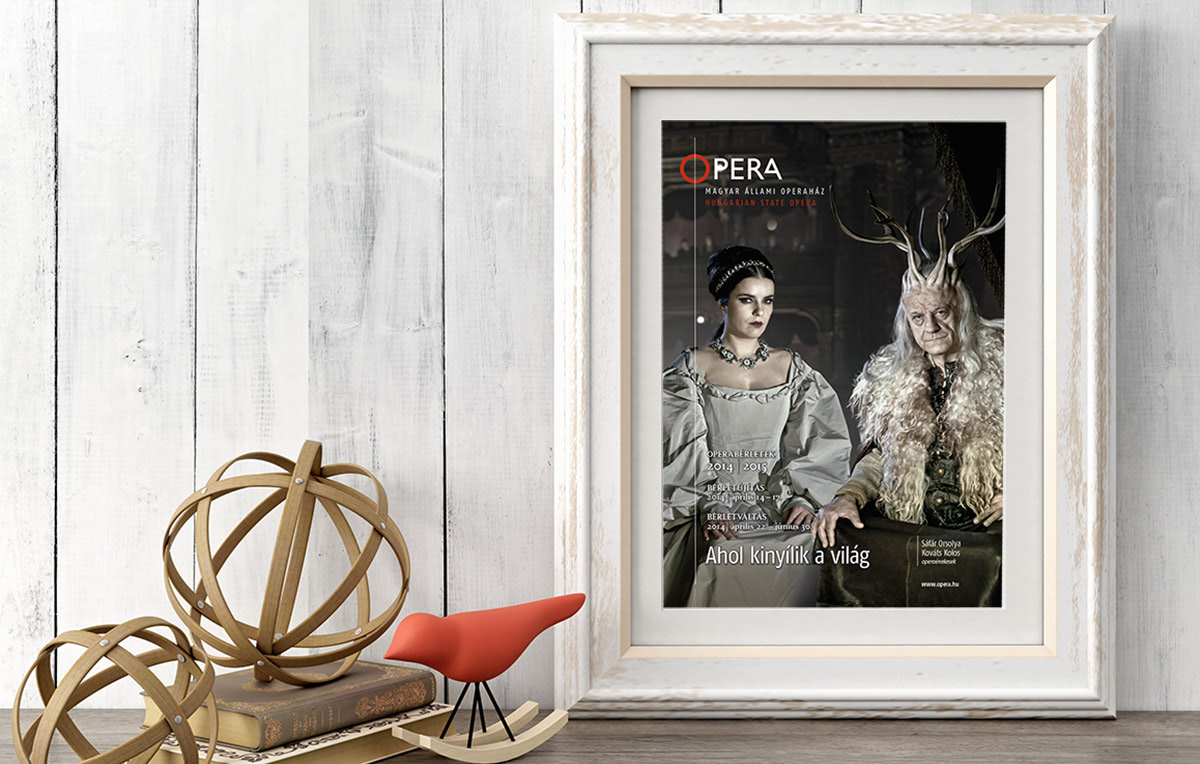 Where the word unfolds was the third year of a campaign series, it had been also the closing year of the series. For that a large-scale image film, a 12-piece creative and a related werkfilm had been made in connection with the Faust season 2014/15. The surrealist-style short film, which promotes the richest offers of the Opera ever so far, enlivens the fairytale world of the Opera House with both theatrical and musical symbols, depicting both the real world and the world beyond real world. The heroes return to their own medium to the Opera House. Contrary to the campaigns […] 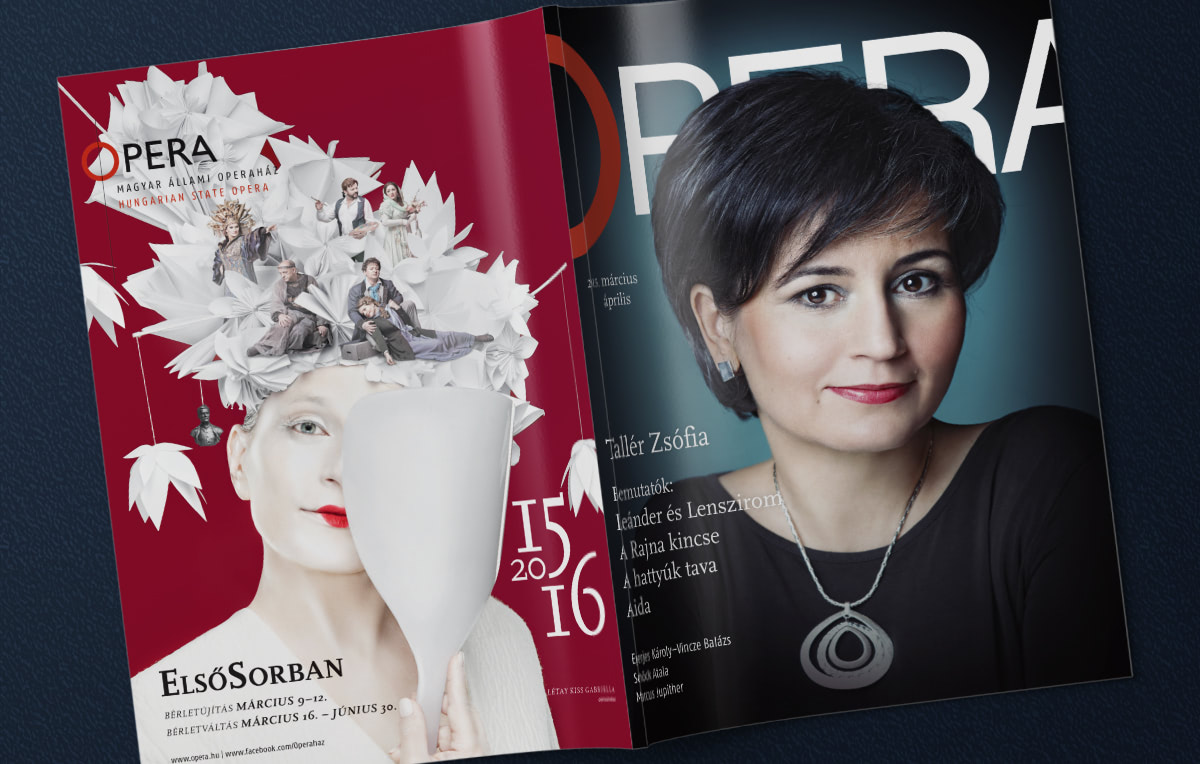 The first free magazine of Hungarian State Opera was published in September 2012 in 66 pages, 15,000 copies. Over the past five years this number has risen to 20,000. In the bimonthly page of the page, you can read about the upcoming premieres, in the portrait section you can get to know more about the artists of the Opera House and the world stars  performing in Hungary. We can gain insights into the world of singers and their correctors, have a sneak peek at the lives of musicians. We get to know more about the current festivals and we can […] 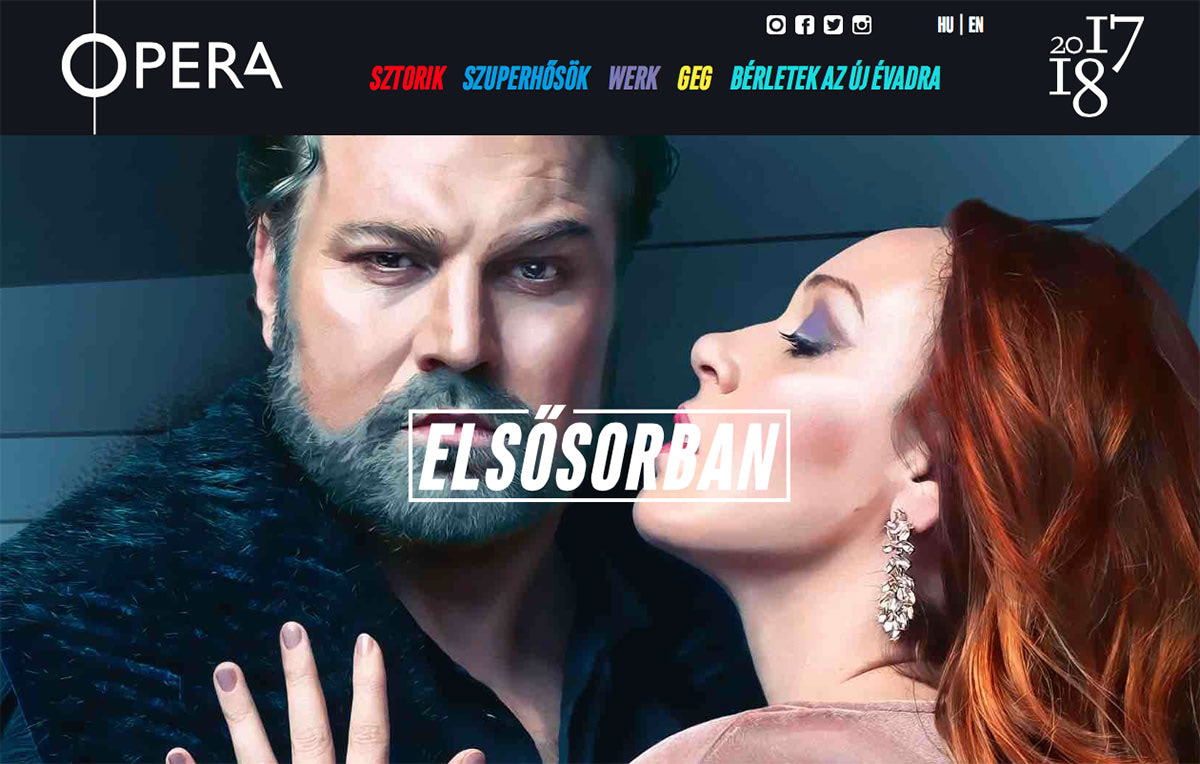 For the premieres of 2017/18, visitors can first test their knowledge about the opera on the page of opera.opera.hu and participate in prize contests. Each artist on 12 creatives had been given a special superhero cards with these a person is able to learn about the main characters, “heroes” super powers and weaknesses. Additionally, you can send messages via Facebook or e-mail to by filling the text bubbles of the creatives with content. 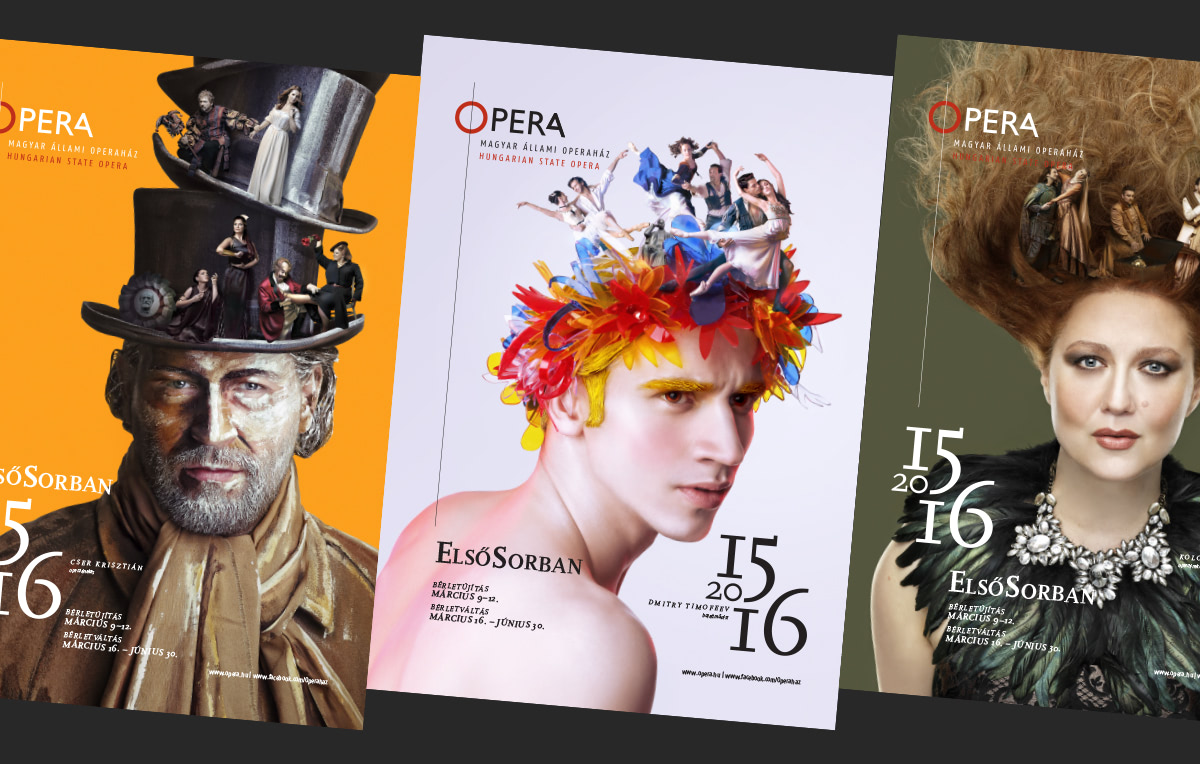 After closing the three-part campaign of “Where the world unfolds” the 2015/16 season started with the new slogan of “First of all”. For the image campaign ten creatives had been created featuring all opera genres, as well as the stars of the various artistic branches representing them. Portraits can be seen on creatives reminding of fashion photographs, but if we are looking for a longer time we can observe details that are more important, for example in the ikebana and origami headgear of Létay Kiss Gabriella (Cio-Cio-san) we can find additional Puccini characters. The digitally elongated neck of dancer Lili […] 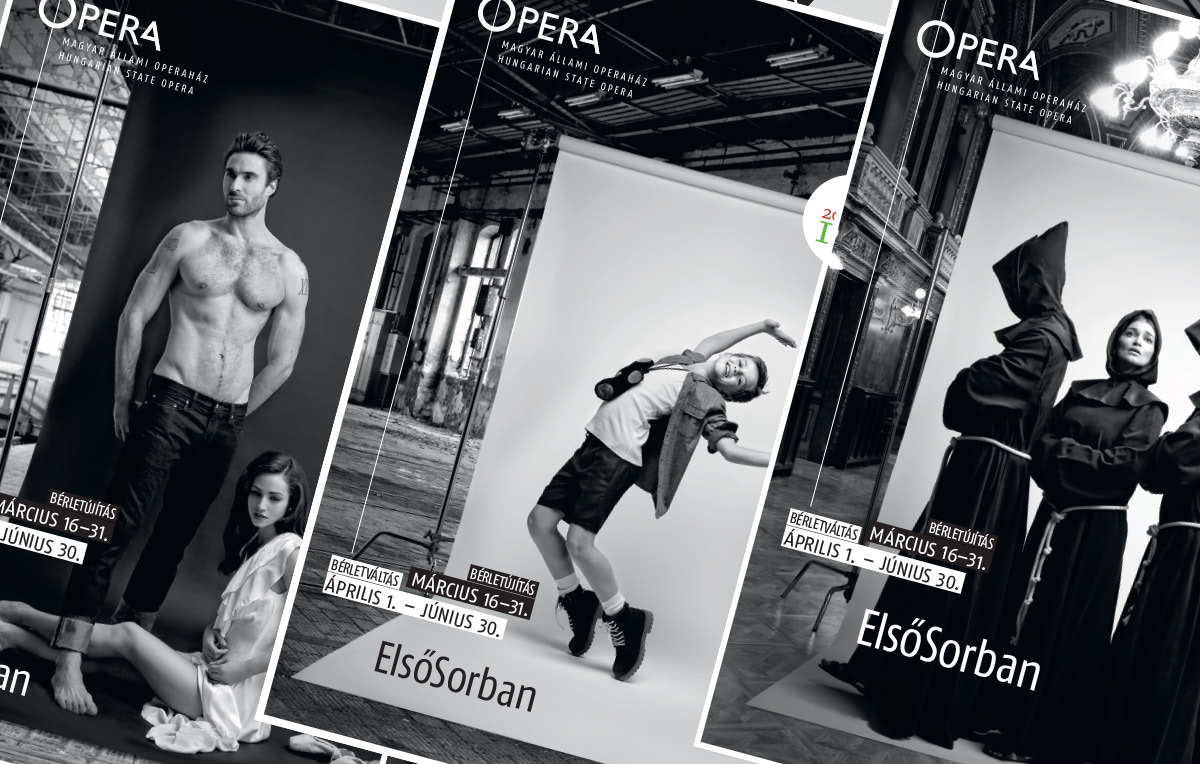 From the previous year’s surreal world the creators of Opera had stepped into the pure reality for the 16/17 season. In addition to the artists and the pieces they summon, the place itself is of great significance, since beside the Opera House and the Erkel Theater, the Eiffel Workshop-house which is under renovation can be seen. The heroes of the posters are shown in situations where we can not see them from the auditorium and have a glance behind the scenes. Since opera and ballet also takes up other arts, this is how we came up with the idea and […]