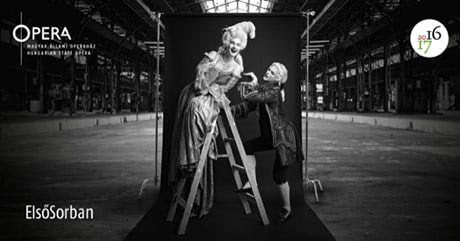 The Opera House presented its 2016/17 campaign related to the Hungarian Season at the past press conference at the Opera’s rear stage store. The visitors were lead in from the big gate of Lázár Street by stuff dressed in costumes.

According to the previous year the creatives are multifold. This year not only the artists and their roles in the plays are important but also the place where the is very meaningful. Beside the Opera House and the Erkel Theatre the Eiffel Műhelyház – which is under construction – can be seen.

From last year’s surreal world, this year we are stepping into pure reality. The heroes of the posters are shown in situations where they can not be seen from the auditorium. We look behind the scenes to show what the artist is experiencing during preparation and tuning; moments from the joyful scenes of rehearsals, images of fatigue, catharsis.

In the first phase of the concept, we have not yet considered the black and white world. The team of artists jointly sought the unique visual world for this “production”. Since opera and ballet also takes up other arts, this is how we came up with the idea and the that Hungarian art has world stars in photography as well (André Kertész, Brassaï, Martin Munkácsi, László Moholy-Nagy, Robert Capa). That’s why we summoned the expressive form of almost all major artistic photography, the black and white pictorial representation for the this campaign. The difference from the street’s colorfulness jumps out right away. It was another task that this kind of appearance should not show an archive, past-minded mood. The clever, contemporary typography places the creatives into the present.

This year’s 12 creative image features ballet and opera pieces such as Harry János, Háry János, A vágy villamosa, Love and other daemons, Spartacus, Szerelem, A csodálatos mandarin, Don Giovanni, Székelyfonó, The pirate, A kariói lúd and Billy Elliot. The works that have been created by the hands of mostly Hungarian composers will be reunited on the Hungarian Festival Marathon starting in May 2017.

First time in the next season the number of sites will be expanded, thanks to the Eiffel project that was started last year. The base set up in Kőbánya will not only serve as a workshop place, but as a lecture hall, as a stage, where lovers of the genre can buy a ticket for each production.

This is also a great necessity, as the 14 new premieres, the premiere of Hungary, 11 opera reconstructions and 3 ballet shows will be visible in the new season starting in September with the expanding repertoire offering.