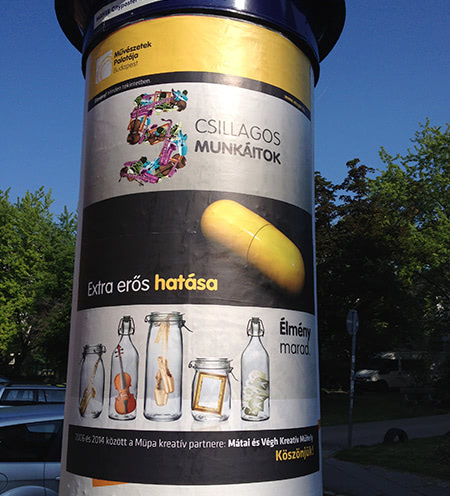 Müpa has placed a public poster placed in front of our office thanking us the work we had done for them between 2006 and 2014.

In the past 9 years, Müpa has virtually become a world brand and has become an inevitable factor in international art circulation, helping to put Budapest and Hungary on the cultural map of the world.

From the opening of the Müpa (March 2005), the  building of Müpa brand’s was continuous and conscious act, in which our agency has carried out considerable work from the beginning to the present day. As a result, after a few years, the institution was able to create a strong, positive brand image in the audience’s head. Among other things the reasoned corporate image and communication of Müpa had played a major role in this.

We had been working on the complete visual communication system of Müpa for a year, (which we have been updating since then) which has resulted in a fully-fledged corporate image appearance and has been well examined both domestically and internationally by the profession and the general public as well. We have been aware of the diversity of genres and we managed to show its variegation by setting up diverse campaigns, this way also positioning the brand.

Since in the meantime somehow  Müpa has”grown to us”, we will be interested to watch the activity and renewal of its communication.