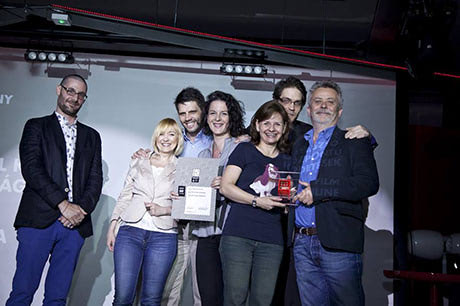 We did not come home empty-handed from the Hypnosis awards ceremony last night: we received a gold and a bronze prize for the image film created for the concept of the “Where is the world unfold” for the Hungarian State Opera and for the press conference held for it in the Planetarium.

The Kreatív monthly issues trade magazin organized the Hypnosis for the 20th time, which is designed to award the best works of the past year. From the record number of entrants, 118 had been shortlisted and during the evening nearly 60 prizes were awarded.

The event and the after party was held at Tesla,which opened last year and is one of the coolest spots in Kazinczy Street thanks to how high-end its name sounds and its sophisticated bar culture.

The Hypnosis Prize is also intended to encourage and reward domestic creativity and support creative agencies to have their visibility and recognition increased.

We are proud of our recognition.