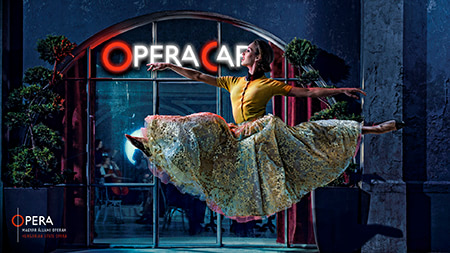 Similarly to last year, the Hungarian State Opera opened its doors in the spring with an image campaign. It was the first film to be produced in the institution’s life.

Keeping the slogan “Where is the world unfolds”, we continue the communication strategy that began in 2012.

In the life of the institution, it is was the first time a public service advertisements had been made which would like to communicate the public service activities of the Opera House and the Erkel Theater, this way communicating the outstanding importance of culture.

The campaign launching in mid-April will ring in the 2013/14 season and will also promote resident playgrounds, genres and ensembles. The campaign’s creativity (the movie itself) was inspired by Carmen, but other creatives have also been created that will be used in calendar, offline and online communications for next season.

This seven-piece series for the three premieres was made for the  the Strauss year celebrating opera, Die Frau ohne Schatten, Aranyecset ballet, and the Parázsfuvolácska created for children, furthermore for four more productions on the program: Anyegin, Mephistopheles, Arabella and Madama Butterfly.