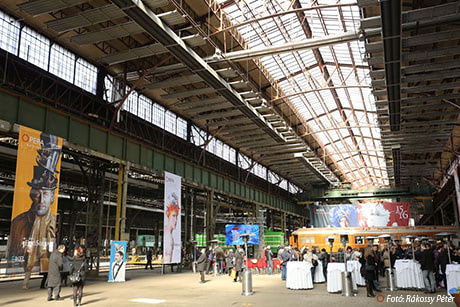 The the press conference the Opera presented its 2015/16 campaign for the Shakespeare season in the Eiffel Hall yesterday. We were also on the spot.

In the new season starting  in September, more than two thousand programs are offered by the Opera and Erkel Theater: 32 premieres, 45 repertoire productions, 100 concerts, chamber performances, gala, event and festival performances, 200 children’s programs, 600 building tours and over 1000 ambassadors presentations are waiting for the visitors.

In order to keep this high standard and wide range of programs in the future the 131 year Opera – with the support of the Hungarian government – launched the Eiffel project, which will create a complex workshop place and base for 2016 that will host the nine manufacturing plants, two size test pads and the huge inventory and convenience store.

“The most imminent task, therefore, is to refurbish the infrastructure: with the government decision, with the Eiffel project can be started that builds a base that combines all warehouses and workshops, supporting two trial lanes and a studio-capable music hall to improve Opera’s conditions.” – said Szilveszter Ókovács.

In the 2015/16 season, the “FirstRow” campaign was made up of ten creatives, each of which features all the operas genres, as well as the stars of the various artistic branches representing them. 58 artists participated in the photography, on the image creatives 24 opera and ballet productions are presented.

On the press conference the following werkfilm was also presented, which allowed the audience to gain insight into behind the scenes. In the video, our creative director, Endre Végh and the art director of the Opera, Zoltan Fekete can be seen.