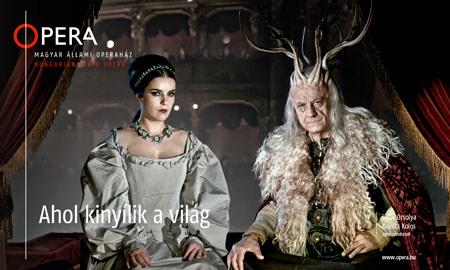 The 2014/15 image campaign is an organic continuation of the creative concept of the previous season. Each year, we have shown a strange visual world to the target group, which distinguishes the Opera House’s communication from other cultural institutions in Hungary.

Live, playful artists, summoned performances and pieces in a unique visual world that brings the opera genre closer to fans and new generations. This year’s campaign closes the trilogy in a strange surreal-real world. The adventure of the heroes of the film in the Opera is surreal yet real because as the genre of the opera it is overwhelming. Surreal, as the plays and people are recalled in the film in a way we can not see them on stage.It’s realistic, as the artists of the Opera play their role and everything happens in the house today. The created movie and drawn creatives give a fresh impression to the audience, but it also stimulates them to think about what is behind the figures and pictures. This movie could be any operas paraphrasing, but we could expect an opera fan to figure out the whys.

Here’s the story: Stormy night, Andrássy road. The Sphinx marble at the Opera’s corner opens its eyes, and in the rain an old black car is driven by with its passenger: Faust (or perhaps the The Flying Dutchman), whose driver is Mephistos himself – the former Anyegin. Scary, stormy weather: thunder and lightning, the car’s windscreen as a metronome, occasionally lets Margit (maybe Senta?) to be seen- but the woman disappears in a blink of an eye – and it is not known that it was just a glimpse or the reality. It is not known either: the car was running over her, or she was never there, only the passenger’s eyes dazzled.

Faust gets out of the car, but he doesn’t seem to see the woman anywhere – so he goes up the stairs to the entrance, to the Royal Staircase of Opera, where suddenly the door shaping the O-letter starts to shine. He enters the building and immediately finds himself in the Opera Hall, literally: where his own self confronts him with opposite shadows, then he continues his journey and search, following an inviting snake, raises his gaze to the stairway where Senta rises from an old aquarium made of marble. Senta, or The Mermaid of the Rhine treasure floats in the water – in the middle of the deserted square? As the protagonist approaches, the mermaid moves around and hurls the Dutch … But who is this woman and where are we? Perhaps in the Egyptian desert where Aida is buried alive in her love – and thus imprisoned in her own prison, or does Senta’s destiny looks back on the the flying Dutchman?

Who knows, because as Faust sees their face opening the medallion: Margaret and himself, but that it is merely a projection of Faust’s memories or are we in the present: it remains a riddle, as we will see them in the glass cut of the door leading to the Opera boxes – as they turn away from us. Have we been in the past or are we in the future? And the door, like an old book, opens: where Tosca is watching us, who is showing – not only her inner self, but as Ulrika the future to the scientist Faust. But what Ulrika points to through the rippling, dry leaves in the unrealistic time-lapse: comes to life. Faust finally entered into the room of his fate that might have been opened by the Bluebeard because Judit ask for it (or Judit herself in the seventh room?).

However, our hero is driven by an inner force – while he realizes: the world stands on top of his head and spins on it. When he sees the prince on the ground, he looks at the dark side of the swan’s face. As the swan turns, he turns the prince’s pure human face to the stranger and then there is nothing left of them but a pieces of black feathers and a sheet music.

However, the Dutchman does not give up the search, he slides behind all curtains, so he meets with his eyes with Prince Fülöp – the old, the crown wearing king and his wife, Valois Elizabeth, the young queen. Do we really see Fülöp and Elizabeth, or was it just delusion, and Falstaff is sitting in front of us in a perpetual cycle with Alice, who fools the knight? Who knows: that Elisabeth or Alice’s gesture can just as well be an overt of painful scream as the mouth of laughter opens for us the universe, as pain and joy between the two opposing poles are the “feelings of all”: in which floats on the Dutch’s red sailor  toward a haunted spaceship.

But what kind of universe is where the boat of the Dutch is heading now, and how can it be seen if the Dutch is just visiting Fülöp V. at the Opera Proscenium lodge? And what could be the specially designed, relief-enriched parapet in the universe full of stars? And whose view are we following when see the musicians playing in the orchestral trenches, we see the stage where the performance is taking place: between the flying creatures of Hippolytus and the pirate ballet dancers we see a familiar figure: Faust.

He looks into the scientist’s binoculars, and finally we see what he sees: Senta, Margit, the floating mermaid, the eternal woman in space, the stars, and slowly emerging the parapet, and the bright spot believed to be the billion celestial bodies: the glittering rows of the Opera’s auditorium, and we realize at the “landing on the ground” of our heroine: no matter what we saw before delusions or memories, dreams and realities: because we are in the opera where everything is possible. Where the world unfolds.

Shoko Nakamura is also a star: the glittering star of the National Ballet, whom was followed by Krisztian Cser, a physicist opera singer. 2014/15 is Faust Season. Applause and ovation. In the invisible backstage, maybe the conductor is still sitting in one of the strange rooms, who was in the orchestra pit a minute before, and in the hall of Opera there is the “Arpa d’or dei fatidici vati” (“the golden harp of fortune-telling vats” – Nabucco, translated to hungarian by Ferenc Anger) the orchestras harpists play until the end of time.