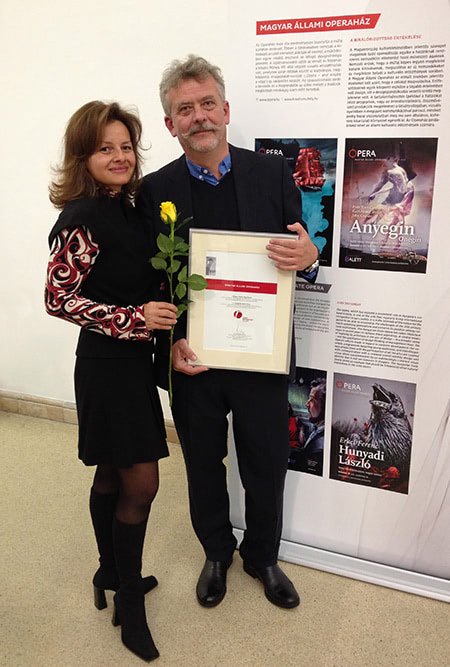 On September 30th the Hungarian Design and Design Management Awards of 2013 were awarded at Műcsarnok.

In addition to the winner, three more institutions have received recognition and wider publicity for their work and their successful design management practices, including the Hungarian State Opera House.

At the awards ceremony which was organized for the fifth time this year’s, Miklós Bendzsel, the president of the Hungarian Office of Intellectual Property and the Hungarian Design Council gave the award to Mónika Turkovics, Director of Marketing and Communications at Opera.

The members of the jury highlighted that they agree that there are some things that are common in the companies that operate in a wide variety of distant areas in their field, “that the corporate image created by a well thought-out, well-designed team of experts in design, marketing and communication is essential to all organizations”.

“For many years, the Opera has proven to effectively secure the ageless genre’s operation. In this endeavor, not only the different facets are transformed with success; the presence of a comprehensive design strategy is increasingly felt in the operation. The most spectacular innovation in the past year was the visual image update by Mátai és Végh Kreatív Műhely, which included new releases, an astonishing image series (“Opera where the world unfolds”) and the advertising film. During the repositioning process, designers and client have been keeping the tradition alive and in mind. ”

“One of the most important pieces of art in Hungary’s cultural history is one of the art branches that regularly give international recognition to our country. It is a national interest that the genre is able to meet the challenges of our time, address new generations and preserve our place in the cultural institutions.

The Hungarian State Opera House has taken significant steps in the past years to achieve these goals. One of the central tools of its efforts was in a wider sense the design, and even the design thinking about appearance at managerial level. Content development (for example, the programs aimed at young people or the emergence of interdisciplinary, full-scale productions) is coupled with renewed communication in the visual world and visual language. The Opera House can be an example for cultural state institutions.